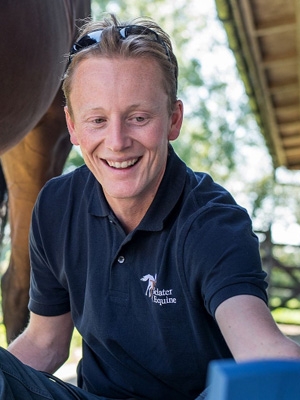 Peter grew up on a farm in Dorset and was involved with horses from an early age. During childhood, he particularly enjoyed cross-country and hunting with the Blackmore Vale.

Since qualifying at the University of Bristol, Peter has gained veterinary experience both at home and abroad. He has worked locally with The Kingston Veterinary Group in Sherborne and Delaware Veterinary Group in Castle Cary, and further afield at practices such as The Liphook Equine Hospital. He also spent a very enjoyable year working as an equine vet in South Australia. Peter was awarded the Certificate in Equine Practice by the Royal College of Veterinary Surgeons in 2010.

Peter is married to Nicki and has three sons. He enjoys spending time with the family and playing tennis in his spare time.